skip to main | skip to sidebar
WELCOME to the LNS Institute Website!****** "Be the change you wish to see in the world."
The International Institute for Leadership, Non-Violence, & Service (LNS Institute) was in the works for many years in several forms, then officially founded in the Fall of 2001, by Mr. Lindy P. Crescitelli and Mr. George S. Anthony. The LNS Institute draws upon historic lives and events (including the Holocaust and Civil Rights Movements, Dr. King and Ghandi), while focusing on the present, with an eye toward a better future. Always firmly building upon the foundation that is our motto, "Learn, Lead, Serve".

A Culture of Prejudice Killing Our Youth

"For a minute I need to talk to you about something that's really serious and really sad ... An openly gay 15-year-old boy, named Larry, who was an eighth grader in Oxnard, California, was murdered by a fellow eighth grader named Brandon ... Days before he was murdered Larry asked his killer to be his Valentine ...

A boy has been killed and a number of lives have been ruined. And somewhere along the line, the killer, Brandon, got the message that it's so threatening and so awful and so horrific that Larry would want to be his Valentine -- that killing Larry seemed to be the right thing to do.

And when the message out there is so horrible; -- that to be gay, you can get killed for it, -- we need to change the message. Larry was not a second-class citizen. I am not a second-class citizen. It is OK if you're gay ... I know there are entire groups of people who face discrimination every single day and we're a long way from treating each other equally. All of it is unacceptable. All of it.

But I would like you to start paying attention to how often being gay is a punchline of a monologue or how often gay jokes are in a movie. And that kind of message, -- laughing at someone cause they're gay is just the beginning. It starts with laughing at someone, then it's verbal abuse, then it's physical abuse and then it's this kid, Brandon, killing a kid like Larry.

We must change our country, and we can do it. We can do it with our behavior. We can do with our messages that we send our children. We can do it with our vote ... There is a lot of talk about change. I think one thing we should change is hate. Check on who you're voting for, and does that person really truly believe that we are all equal under the law? And if you are not sure, --change your vote, -- we deserve better. My heart goes out to everybody involved in this horrible, horrible incident, ... all the families, ... even you know, Brandon's life is changed because he did this. "
-Ellen DeGeneres,
on her TV Talk-Show, February 28, 2007

LINK
LINK
On Feb. 22, 2008, transgender teen Simmie Williams Jr., at only just age 17, was shot dead on a Boulevard in Florida after witnesses allegedly heard an argument that included anti-gay slurs. 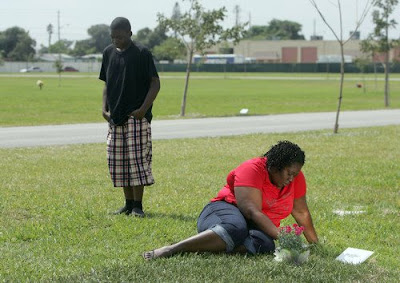 Williams was an openly gay teen who was shot
in what police are investigating as a possible hate crime.

His brother, Tavaris, 14, went with his mom to the cemetery.

Find out more about: